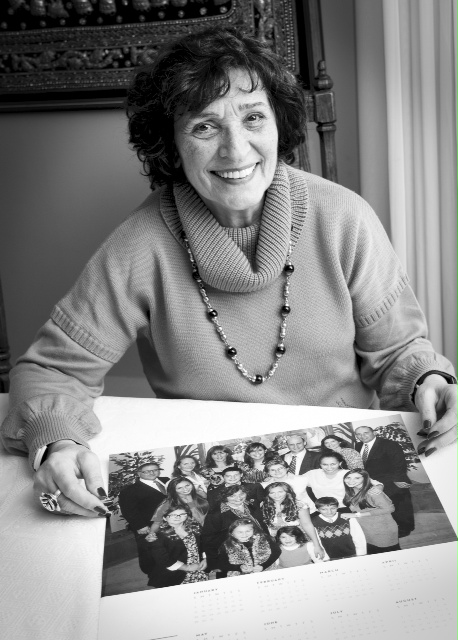 Have you ever had to wait for medical test results?  Probably most of you have.  What runs through your mind?  The worst of course!

A quote from our lovely Rose; "After Thursday when I get my test results I will know if I have lots to look forward to".  Rose has 4 children, and many grandchildren, scattered across Canada and the United States.  A few years ago, miraculously, the family came together and a photo was taken.  Here is Rose with her much cherished image.

Rose is thinking the worst.  She has been diagnosed with 3 separate cancers.
"In 1994 I had kidney cancer and had a kidney removed.  In 2002 I had uterine cancer and everyone said, 'Oh you don't have to worry about cancer anymore you are Scot-free' and exactly 5 years to the day later I got lung cancer".

In 2010 she lost her husband Sam suddenly to a massive heart attack, and in the past year has had both hips replaced.

She says she tries not to think about the tests and what the results may be but then says: "I think about it every... I try not to think about it but for this past week its been tough.  I ordered new glasses.  My son was in town so he took me to get my new glasses and I thought I shouldn't spend that kind of money you know.....because what if I get bad news, I will have wasted money on glasses I won't be needing for long....?  (Rose crying, wiping tears away).  But I did.
People tell you, you should think positive.  I've been thinking positive since 1994 and look where it's gotten me and the last time I saw my Doctor, he said to me, 'I think this time we'll wait for six months between tests' and I said 'Oh thank God, I have less to worry about'.  He said, 'What do you mean?' and I said to him 'Well, I worry a little bit the last couple of weeks before test time'.
He gave me such a lecture.  He said 'I ride my bike to work everyday and I don't think I am going to get killed on my way to work' so I looked at him and said 'Doctor isn't that a little different than getting cancer?' and he said 'Same thing'!  Is it the same thing?  I don't know...."

Rose puts into words what so many are afraid to say - "....I will know if I have lots to look forward to".

Is there a way to cope while waiting on test results?  Some say it's the hardest part of the cancer experience - not knowing, but is knowing any better?  Certainly if you get good news then yes, knowing is better but what if you get bad news?  Is knowing still better?

From our interviews with patients we have found that yes, knowing (even bad news) is better than not knowing.
How could that be?
When you don't know, much like Rose said, you don't know if you have lots to look forward to but good or bad news, you have lots to look forward to because good news or bad news, you can form a plan, take action and harness some control over your situation, but waiting for test results leaves you in a suspended  state where living practically ceases and existing reigns supreme.

Is it better to live, or is it better to exist?  It's better to live of course!
Some feel it would be better if you could get your test results quickly.  Sometimes they come quickly but sometimes they don't.  The longer the wait, the longer the patient is placed in 'nowhere land'.  The long wait can be a good thing though.  If the news isn't good, it gives the doctor a chance to review your case, meet with colleagues and form a plan of action so when you do have your appointment, much of the groundwork has already been done for you - a plan has begun, there is a future to look forward to.

Many jump to the 'worst case scenario'.  That is the scariest possibility and a place where patients waiting for test results tend to spend a lot of time.  At 'Cancer Crossing', we have interviewed several people who have received 'worst case scenario' news and each time we reconnect there are big hugs all around.  With any cancer diagnosis, there is always time for hugs, tears, laughs, reflection and making plans.  With a massive heart attack, you are gone in an instant.  Is that better?  Who is to know?

Cancer works in mysterious ways.  Carpe Diem is the saying.  Cancer or no cancer, everyone would be wise to Carpe Diem, each and every day.